Discuss anything you like about chess related matters in this forum.
Locked
413 posts

Absolutely right. I am a firm believer in capitalism, more so perhaps than you, but it is corrupted. To me it means that equity investors, and indeed bondholders, make a good profit when things go well and lose their shirts when they go wrong.

There is no place for a "mixed" system under which they keep their profits but losses are made good by the taxpayer. This has become the norm in the banking sector and is in danger of spreading under cover of the current difficulties.
Top

Meanwhile Wuhan begins to lift its lockdown, "after more than two months of isolation", which may (with all kinds of riders and qualifications) give some indication as to how long it will last elsewhere.
"Do you play chess?"
"Yes, but I prefer a game with a better chance of cheating."

Coral betting shop on London's Roman Road where staff seemingly believe the coronavirus will be worse than seasonal flu: Whether the country would run better without him, Johnson and some of the others is a good question; they wouldn't be on my list of key workers

They are members of the elected Government. Moreover, at present you still live in a country where you are at liberty to make the comment which I have quoted.

If you think that a different set-up would serve the nation better, be careful what you wish for. I have heard some pretty horrifying reports about the potential outcome in Iran.

No, I don’t want to live in Iran; nor in China or North Korea, nor in Putin’s Russia or Trump’s America, but I haven’t wanted to live in this country when we elected Heath, Thatcher, Major, Cameron or May either

Then again, I didn’t want to return last Thursday, for the first time since my dad died in 2016, to the registry office where I had registered his death, the solicitors who dealt with his estate, nor the funeral directors who organised his funeral; nor this Thursday to the crematorium where we had said goodbye to him; Thursday was my daughter’s 4th funeral before her 15th birthday, and with another terminally ill relative, she may well attend a 5th before she is 16

What I am acutely aware of, though, is that other people will be making a similar journey, often wracked by grief, rather than the relief we felt when my aunt finally died from her terminal illness, and often without the experience and resources that I have acquired

You’re probably aware that this football season hasn’t seen me at Gigg Lane, but instead during it I have met, albeit mostly briefly, more than a hundred NHS staff on visits with my uncle and aunt to hospitals in Chorley and Preston; I have met these mostly for the first time, although I did meet a sister who had cared for my dad on the ward on which he died, which was an opportunity to thank her; I’ve met staff who deal with safely discharging elderly people with physical health problems plus early stage dementia, social workers and support workers, care staff in the community, at a nursing home and a care home, and staff of all sorts at the assisted living home near Chorley where my uncle now lives

These people, and many more like them, were let down by Jeremy Hunt, by call me Dave and strong and stable Theresa, by coke it’s the real thing George, and spreadsheet Phil, by £350 million on the side of a bus Johnson, and they continue to be let down by incompetent Hancock

Like many other low paid workers, they are doing their very best in the current circumstances, and I’d like to see all of them have access to tests for the virus ahead of the Prince of Wales, the Prime Minister and the Health secretary, because they are key workers; I don’t really see what’s hard to understand about that, any more than they should have PPE where needed and we haven’t organised that either

Posters here will have voted for parties led by austerity Swinson and the idiot Corbyn, to stop the Tory party, and know that failure will result in more people dying; Paul likes us to show our sources, so here’s an article with a reference to Steve Hilton, one-time adviser to David Cameron saying that

austerity policies in the UK caused an extra 130,000 deaths

I don’t want to see anyone get sick, or die, but they will; it’s tragedy to read stories like this and quotes from grieving families like

We feel doctors at the moment really are open to the disease and they need a bit more protection than what is being offered. We doctors feel like sitting ducks.

I do live in a country where I can say this, but it is also one where lots of the press is owned by government supporting people who don't pay UK tax, and thus don't fund the services on which we rely, but print lies; and one where the government is considering bailing out Virgin, an airline owned jointly by Richard Branson, a rich billionaire non-UK taxpayer, and Delta, a solvent American airline, yet can't actually support UK taxpayers struggling through no fault of their own

Rather more people were sick about the football, which as I recall quite possibly affected the result. I was 18 and had just been given the vote, but couldn't even be bothered to spoil my ballot paper, as I more responsibly did in 1974.
Top

Rather more people were sick about the football, which as I recall quite possibly affected the result. I was 18 and had just been given the vote, but couldn't even be bothered to spoil my ballot paper, as I more responsibly did in 1974.
[/quote]

I was gutted about the loss to West Germany myself and the politics at that time were not really important to me as a 10/11 year old but I do recall people saying that it was felt that if we had retained the World Cup then Wilson would have retained the keys to No 10.
Top

I remember my father being very sick when Ted Heath won

.... but don't forget Ted did give us E Heath Day that many people are too hungover to remember nowadays, but it was much celebrated at the time.
Top

Back very much on topic, Prof Neil Ferguson. I knew I remembered that name, and just as I was connecting it to the foot and mouth scandal, this appeared.

He was the academic whose flawed mathematical modelling caused vast numbers of animals to be unnecessarily slaughtered and burned, leading to destroyed communities, suicides of distraught farmers and an industry which has never fully recovered.

If his models are being taken seriously now, then perhaps my relatively rosy views regarding the outcome this time may need to be reviewed.
Top

NickFaulks wrote: ↑
Sat Mar 28, 2020 8:39 pm
Back very much on topic, Prof Neil Ferguson. I knew I remembered that name, and just as I was connecting it to the foot and mouth scandal, this appeared.

Well, some of it did.
"Do you play chess?"
"Yes, but I prefer a game with a better chance of cheating."

Sorry, I assume it must be paywalled. Here's the bit where he gets it in the neck.


"However, it has now emerged that Ferguson has been criticised in the past for making predictions based on allegedly faulty assumptions which nevertheless shaped government strategies and impacted the UK economy.

He was behind disputed research that sparked the mass culling of farm animals during the 2001 epidemic of foot and mouth disease, a crisis which cost the country billions of pounds.

And separately he also predicted that up to 150,000 people could die from bovine spongiform encephalopathy (BSE, or ‘mad cow disease’) and its equivalent in sheep if it made the leap to humans. To date there have been fewer than 200 deaths from the human form of BSE and none resulting from sheep to human transmission.

The scientist has robustly defended his work, saying that he had worked with limited data and limited time so the models weren’t 100 per cent right – but that the conclusions it reached were valid.

Michael Thrusfield, professor of veterinary epidemiology at Edinburgh University, who co-authored both of the critical reports, said that they had been intended as a “cautionary tale” about how mathematical models are sometimes used to predict the spread of disease.

He described his sense of “déjà vu” when he read Mr Ferguson’s Imperial College paper on coronavirus, which was published earlier this month."
Top

And I wonder how helpful any of that is without seeing the work concerned so we know what terms like "predicted" and "could" actually mean. Or indeed what the Telegraph may be seeking to achieve here.

Meanwhile, elsewhere in the papers 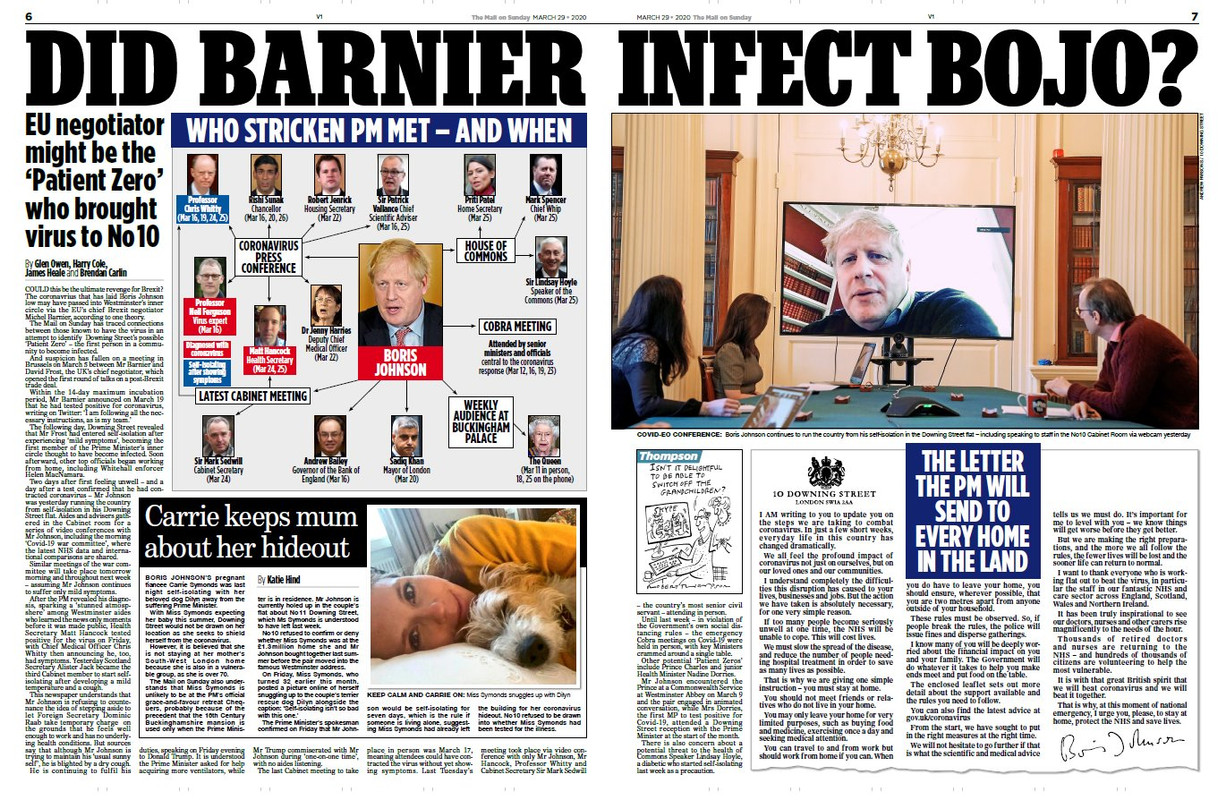 JustinHorton wrote: ↑
Sat Mar 28, 2020 10:31 pm
And I wonder how helpful any of that is without seeing the work concerned so we know what terms like "predicted" and "could" actually mean.

What we know is that a past government followed his advice, however nuanced it may have been ( and he doesn't come across as lacking in confidence ) and a hideous outcome resulted.
Top

Well, we know rather less than that, in so far as we don't know what other advice they had, or what other outcomes were considered likely or available, and I do not think we have any good reason to rely on the Telegraph's digest or interpretation.
"Do you play chess?"
"Yes, but I prefer a game with a better chance of cheating."

John Moore wrote: ↑
Sat Mar 28, 2020 3:15 pm
Mick, that's a heartfelt plea and I can agree with a lot of it but from what I can see, you were six when Edward Heath was elected Prime Minister so I doubt that your views were fully formed at that age

I was 5 actually John, and I remember that the early 70s were grim

; like all the other 5 and 6 year olds, I was massively affected by the education policies of the government, and indeed of governments before I was born

Chess is a game of choices; we all play on the same board, as it were, and we all have the same information, but we make different choices; we then have to accept the consequences i.e. I played well or badly, I won, lost or drew

I'd just like the same to apply to accepting the consequences of who you vote for; you mention elsewhere about Corbyn, and yes, I'd expect he'd not have handled this as well as I would like, but unlike the current government, he's not spent years telling rubbishing experts and so I think the effect of having the current government, as opposed to the alternative, is negative

Take care and stay safe
Any postings on here represent my personal views and should not be taken as representative of the Manchester Chess Federation www.manchesterchess.co.uk
Top
Locked
413 posts