Not sure where to put this, here or Chess History....here because I think most people come here first.

I was In Berwick Upon Tweed yesterday and bought for £1.00 this: 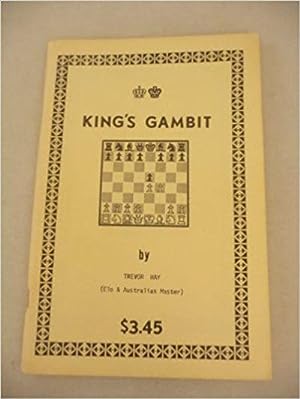 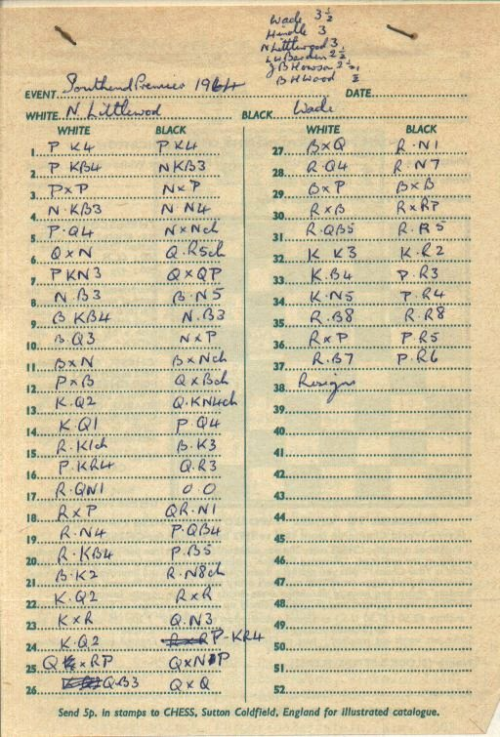 I know it is a long shot but can anyone tell if this is on Norman's or Bob's own hand. (just curious.)
It looks like an original due to the crossed out mistakes but the current scores at the top are misleading.

Could not see the game in Britbase and according to chessgames.com
Norman is leading Bob 3-0 with no draws, this win will put Bob on the scoreboard.

In the Book the author, Trevor Hay, comes up with an interesting suggestion here (White to play)

I don't know Norman's handwriting but it could well be Bob's.
Tim Harding
Historian and Kibitzer

I concur with Tim, Bob had very clear handwriting.

The opening variation is the setting for a famous anecdote. It was played with 4...Ng5 4 d4 in Bronstein v Bernstein, USSR v France, Paris 1954. Bronstein was only level from the opening but managed to squeeze out a win in a long game. However when they began their post-mortem Ossip Bernstein said "Young man, you play worse than the immortal Tchigorin! When I chose 4...Ng5 against Mikhail Ivanovich in the all--Russian championship at Kiev 1903, he replied 5 c3!"

Not sure if 5 c3 is really better, but it's a nice story.
Top

Thanks Tim and Leonard,

Bronstein mentions adds more background details about his game v Bernstein in his '200 Open Games'
( an odd book that one, some days I think it's wonderful, other days, it's no good at all.
It's the only book I have that affects me this way. When I was clearing out my chess book
collection that one was in and out of the 'must keep' pile. I kept it. )

Hopefully it's Bob's as then I can do a link article on Bob writing out Spassky's games (twice) for Fischer
at the same time looking deeper at the tricks with 5.Bb5. If it's Norman's I can use it as an excuse for
showing a game of the 'Little Tal' either way I'm on a winner.

Of course it could be A.N. Other, there is no name inside the book. In that case I'll make up a name!

Whilst here Tim. What happened with the missing TN!

Please say you left it out. I love it when things like that happen.
Or did the book go to the publisher just as you found it. A good find BTW.
(There I'm Sally Simpson...favourite Who song.)
Top

I played Norman in about 1970. His writing was very unclear and the letters variable making it difficult to read, which we had to, to check on the number of moves made. Still it was way better than mine though ! Much more likely to be Bobs.
Top

Nice to see such neat handwriting, maintained all the way up to move 37.

The model I have always followed in much scruffier: Fischer's scoresheet in his game v Spassky in 1970. Untidy to start with, but getting worse in tandem with his position.

It always fills me with nostalgia to see descriptive. I still think it has its advantages.
Top

Why on earth did a player as strong as N Littlewood play a complete nonsense like 7g3??
"Set up your attacks so that when the fire is out, it isn't out!" (H N Pillsbury)
Top

Because it offended his sensibilities for a King's gambit to be equal material?
Top

It's not an original because at the bottom of the scoresheet is printed "Send 5p in stamps..." - decimal currency was not introduced until 1971!
Top

Reg makes a very pertinent point there. Definitely a transcription, then, made several years after the game was played, and not necessarily by either of the players themselves.

What's more, if the Southend congress had supplied scoresheets from Chess magazine, they'd surely have had the event name in red across the top.*

One of the o's in Littlewood has been left out. Strange omission. And "B" Wade? I know he was universally known as "Bob", but wouldn't most players nevertheless have written "R G"?

From the crossings-out, I'd say whoever actually did the writing at one point copied down White's 22nd a second time instead of his 24th, and added a couple more before realising the error.

* I've a number of these still hanging around from the early 70s. Interesting to note that the cost of the overprinting gradually creeps up to become more than that of the sheets themselves. After about 1974, they suddenly disappear from general use, to be almost entirely replaced by smaller, less lavish ones from Tournament Chess Supplies.
"The chess-board is the world ..... the player on the other side is hidden from us ..... he never overlooks a mistake, or makes the smallest allowance for ignorance."
(He doesn't let you resign and start again, either.)
Top

Nice work by Geoff, and also Reg for spotting that this was a 1970s copy and not an original. I think this is Bob's handwriting but am slightly annoyed at myself for not retaining some of Bob's scoresheets to compare. I would have had some until very recently when I was belatedly inputting the 1994/95 4NCL games (I played Bob myself that season). Pretty sure I have chucked them out now (though, with my track record for forgetting/mislaying things, they'll probably turn up somewhere in my house in about a quarter of a century's time). Another clue to the scoresheet being filled in later was in his writing of the year - it looks as if Bob started to write a "7" (the decade at the time of writing) and then had to overwrite it with a "6". Given that he copied it out in the 1970s, it's perhaps curious that he chose to do so in descriptive (wouldn't he have been an algebraicist by then?), but I guess it was simpler to do a straight copy from the 1964 original. My guess is he copied it out at the request of whoever it was owned the book and sent it to them. The book was published in 1973.

Surprisingly, given the strength of the line-up, that's the first game score from the 1964 Southend Premier that I've seen. BCM only expended three lines of print on the congress, with the scores of the players (as on the scoresheet) plus the start and end dates (27-30 March). Unfortunately I'm missing a couple of issues of CHESS for the time when it would have been reported - maybe they had more. Or maybe not: BH Wood's score of ½/5 might have tempted him to draw a veil over it! The Times and Guardian didn't mention it. BH Wood, in his Illustrated London news column, mentioned that over 100 people played at that year's Southend. The SCCU Bulletin had a bit more, with winners of subsidiary sections as well as the Premier. In fact, Southend Chess Club has done a splendid job as regards the results, with a complete record of Southend Congress scores from 1957 to 2014, but no game scores that I could discover.

This raises a thought: now that I've published the bulk of Murray Chandler's games online, it would be great to do the same for his great Kiwi predecessor. Imagine... Bob Wade's complete game collection - that really would be something. Has anyone got his scoresheets/scorebooks? He must have played a phenomenal number of competition games. It would need a team of inputters but it would be a worthwhile project to while away the time until OTB chess returns.
Personal Twitter @johnchess
Personal Website https://www.saund.org.uk
Britbase https://www.britbase.info
Top

There's an example of Bob's handwriting online in a tweet by Douglas Griffin...

... which has photos of Bob's 1971 notes submitted to Bobby Fischer in order to prepare for the Candidates' matches. Bob used algebraic notation, which means we are restricted to comparing the letters for the pieces. But the rendering of QRBN are pretty much the same.
Personal Twitter @johnchess
Personal Website https://www.saund.org.uk
Britbase https://www.britbase.info
Top

That is a good spot Reg, nice work.

The score sheet was stapled on the page starting with the section on the Kings Gambit declined
so who ever had the book copied out the score (from somewhere ) and stapled it in for future reference.

I do not have Chess or BCM from that period but can access both in a few days.
Hopefully the game will be in one of those...if not where did A.N.Other get the score from,
how come it got messed up and why are the leading players scores on the top.

"Why on earth did a player as strong as N Littlewood play a complete nonsense like 7g3??"

I've noted up the game and have figured that here...

...Norman played 7.g3 deliberately saccing the d-pawn hoping to get developing tempo on the
Black Queen. It was in Norman's style, you do not get the nickname of 'The Little Tal' playing stodge.

It could have been either an inspired idea OTB or opening prep. Bob played this as Black in 1961.

I was rooting for White going over the game. It's a Reverse Latvian which I play as Black.
3.a3 and go mainline remembering to keep away from the variation where as Black your
King gets chased to a6 and is safe. (as White there is a pawn on a3....you lose!)

As I said I was comfortable noting up the game till the moves 33....a6 and 34....a5.
Some kind of pass the buck letting the White KIng go deeper into Kingside for the final trick.
Ra1, a-pawn to a4,a3,a2, The White King cannot hide from a Rook check and a1=Queen.

But this is a Rook ending and I'm Geoff Chandler

...maybe I'll just leave that bit blank
before I write myself into a deep hole that I cannot get out of.

Edit: Thanks John, we must have crossed posted. I'm not an expert but I'd say the handwriting is
different from Bob's. (back of score sheet says every World Champion from 1896 to 1972 has written
for CHESS. so that settles it. it is not a 'live' score sheet. )
Top

Let me save you the bother of looking it up in BCM. It's not there. There was a game Wade-N.Littlewood that year but it was the one Bob lost a month or so later at Ilford.

I'd be interested in anything you find in CHESS, though. Did they report the Southend tournament in any depth (unlike BCM)?
Personal Twitter @johnchess
Personal Website https://www.saund.org.uk
Britbase https://www.britbase.info
Top

I am fairly convinced that that is Bob's handwriting. I have seen many, many scores of his score-sheets.

Regarding the opening work that Bob did for Fischer, Bob told me that Fischer sent it back twice, because the hand-writing did not suit him, so Bob had to adapt his hand-writing to Fischer's demands.

This should be moved to the Chess History section, btw. Carl...?
Top
Post Reply
36 posts