"He wants to dominate the chessboard, as his father did."

"Perhaps now he will become, like his father, the master of the Middle Eastern chessboard."
Top

You may mean Trent Alexander-Arnold

hahha yes, i always make that mistake, thanks for picking me up on it.

BBC Merseyside reports that Trent Alexander-Arnold lasted 17 moves against Magnus which was longer than Bill Gates did. More pics with Shreyas in the background.
Top

Good for Trent taking it on, and for Magnus for playing along

Trent was on Radio 5 live this morning sometime between 7:30 and 8 am I gather
Any postings on here represent my personal views and should not be taken as representative of the Manchester Chess Federation www.manchesterchess.co.uk
Top

The big match (but not the moves) is featured on the BBC News website:

About 20 minutes of lightweight chess talk on Five Live Drive this evening. Starting with Trent Alexander-Arnold, who lost to Magnus today. Then Malcolm Pein, Sarah Longson and Shreyas Royal chatting with the hosts. https://www.bbc.co.uk/radio/play/m0000lth from 2:38

I had just turned over from the Museum of Curiosity, featuring Deep Blue.
Top 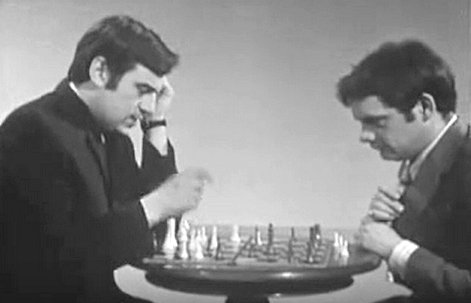 Terry Jones and David Jason playing Chess in 'Do Not Adjust Your Set' episode 5 from 1968.

The full episode is here.

Magnus wins in only five minutes? Just as well with only six minutes on the clocks. Trent does twice as well as Bill Gates, being mated in 17 moves instead of 9? And the assumption that many people seem to have that a novice would have any sort of chance against the world chess champion. It's like Magnus getting to play against Lionel Messi because he likes a kick-around with his mates.

The whole set-up does no-one any favours. Trent has computer and human assistance, but clearly (given his standard of play) unable to get any use out of it with five minutes on the clock, and his opponent moving instantaneouly.
Top

It's worse than you think. He's now being treated as an intellectual. No one ever called you that, Dave

This would be great, and if Trent and Magnus have helped then good for them
Any postings on here represent my personal views and should not be taken as representative of the Manchester Chess Federation www.manchesterchess.co.uk
Top

It's worse than you think. He's now being treated as an intellectual. No one ever called you that, Dave

You'd be surprised what they call me on the Kop.
He seems to be a bright, level-headed lad, but this does no-one any favours. Couldn't they have spared half an hour for the game, maybe 25 minutes against 5, and made it a consultation game with his two 'assistants'? As it was, I'd guess Trent may never have played with a clock before, he's got no time, he's got a computer to look at, two kids whispering in his ear and the world champion facing him. No wonder his play was so awful.
Top

It may well have been that he wanted to play on equal terms. Certainly when I tried to put together Steve Davis against Anatoly Karpov at chess and snooker, both seemed to prefer that. Also blitz fits a TV schedule better.
Top

Guido Fawkes has a piece with a couple of nice pictures. I am not sure how to link to the article, but here is the text

Andrew Gwynne made a rook-ie error while attempting to play chess on a visit to a primary school in his constituency last week, with the Shadow Communities Secretary concluding: “all I can say is it’s rock hard and I’ve been beaten by a 7 year-old called Alfred!”

Guido is not surprised Gwynne was left looking a little board – on closer inspection it turns out that both players were playing without kings. Gwynne might want to Check the rules. Or perhaps it’s just a preview of the coming Corbynite utopia where the monarchy has been removed…
Top

Hi Mathew this should work.

I gather there's chess featured in 1 of the routines on Strictly this Saturday; Pasha plays (he's Russian) but his partner Ashley doesn't (she's American, Pussycat Dolls)
Any postings on here represent my personal views and should not be taken as representative of the Manchester Chess Federation www.manchesterchess.co.uk
Top

This weekends show should be watched by more viewers than normal due to the
coverage of some guy (name forgotten already) who is meant to be having an affair
with one of the dancers whilst his girlfriend looked on. (or something like that.)

All obviously stage-managed and yet the public fall for it every time.