In 1968 I played for the English students' team at Ybbs, Austria where I made a modest plus score

Achieving 5.5/8 (a better percentage than anyone else in the team) is hardly "a modest plus score"!

One might have expected Basman to be there, but IIRC this was when he'd decamped temporarily to Armenia.
"The chess-board is the world ..... the player on the other side is hidden from us ..... he never overlooks a mistake, or makes the smallest allowance for ignorance."
(He doesn't let you resign and start again, either.)
Top

Lest others are as puzzled as I was, the quotation in John Clarke's post is Mick Norris quoting Nick Patterson.
Top

A story about Shreyas Royal and his family in the papers today.

Thank you Bob. That is quite a piece - and well-resaerched.
Top

The Guardian yesterday contained an article on Brexit by Rafael Behr that included the longest chess-inspired simile of its kind that I can recall. It ends with a statement about which we can all agree. The piece also contains a cartoon of people huddled around a chess board. Is the board the wrong way round? Of course, it is

"The parliamentary timetable resembles a densely embroiled chess game. It is one of those brain-aching situations where multiple pieces are all threatening and protecting each other – pawns on knights on bishops on more pawns on rooks. No one in Westminster can see enough moves ahead to know where the advantage will lie in the endgame, after the frenzy of capture and counter-capture has thinned out the board. May is no grandmaster"

For the full piece and cartoon, GO HERE
Top

Hmm. Four-sided chess. OK, let's be charitable, it is consultation chess. The UK only has four pieces (two pawns, a knight and a queen). Maybe the UK king is hiding in the obscured lower left corner? The EU have a full complement of pieces. Apparently the first two rows on each side are not being used. Pity. (The article is worth reading, as is the one on the history of women in chess that Bob posted in case people haven't realised what that is about.)
Top

Maybe it represents the state of the parties at Agincourt! But will the result be the same?
Top 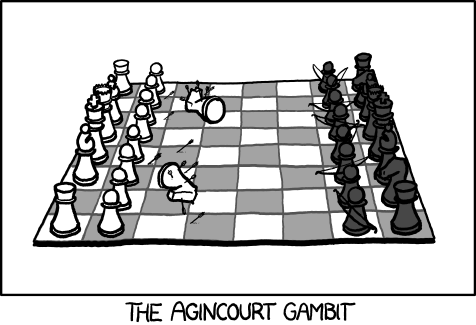 ... and on BBC World TV half an hour ago, with Shreyas Royal, his father and Julian Simpole. The caption running across the bottom of the screen described Shreyas as "the Mo Farah of chess". This analogy was not explained.

The TV presenter did ask a couple of pertinent questions:

1. Was there any precedent for people being allowed to stay in this country because they were good at a sport? Shreyas' father didn't answer the question.
2. Couldn't Shreyas continue his chess development in India if he had to return there? Shreyas' father said it would be hampered because they didn't know anyone in India.
Top

"The caption running across the bottom of the screen described Shreyas as "the Mo Farah of chess". This analogy was not explained."

Mo Farah was an immigrant, who later won lots of medals at international level. I guess the analogy was that Shreyas was also an immigrant and he was definitely going to be a world-beater some time? He might well be of course. Perhaps Shreyas will one day do a TV advert where he runs through a wall for no apparent reason.
Top

Murdoch Mysteries on Alibi Channel, No 16 of 18, series 11. I had never seen any of the previous ones... It is a Canadian drama set in the 1890s, where the eponymous hero uses modern techniques to solve crimes. Here a Russian Master ("ranked 10 in the world") is visiting a Canadian tournament and is murdered. Murdoch gets a colleague to play in the tournament, but wired up so he repeats the moves, and a female colleague (who is brilliant at chess) tells him what move to make, so as to beat the assembled experts... There are some eyebrow-raising moments, but I'll omit those as they might give away too much for anyone who wants to watch it. They don't use clocks and they have conversations during the games!

The board was always the right way round and the moves played made sense, even if the plot maybe didn't. I don't think I'll rush to watch all the 170+ episodes, but it was quite good fun.
Top

World Snooker Championship yesterday on TV. The commentator said something like, 'This snooker is like a game of chess, but with balls.'
Top

"This snooker is like a game of chess, but with balls"

Didn't someone write that "Chess is like snooker without balls" in a complaint about chess similes?
Top
Post Reply
3835 posts