Expensive books and cheap Reinfeld books. One day the two were bound to meet. This is being touted at £37.95

Of course the price reflects the small market it is aimed at but could the 194 pages not have been
knocked out in a 'MIlls and Boon' style cheap paperback, as indeed most of Reinfeld books were.

I'm sure there is a market for a £7.95 paperback series of all the great players.

'Anyone can submit material for Winter's site.'

That is the great thing about WInter's site. It is open to everyone. All submissions will get the Winter treatment regarding verification.

A few years back I discovered I had been the subject of a discussion at the Scottish version of the 4NCL and it was agreed
by all that I was Edward Winter! (100% true). I was approached a few days later in Bells by a group led by an I.M. who took
quite a lot of convincing I was not Edward Winter. (I've no idea were they got that idea from. It was in a way a back handed compliment.)

Which brings me on nicely on how does one become a chess historian?

Is there a course you have to go on or can anyone wake up one day and declare themselves a Chess Historian.
Top

To cut to the chase again: at chessgames.com on 18 November 2019 Geoff Chandler falsely attributed to Edward Winter another person's remark about the Morphy opera game, and he is still refusing to post a correction on that website.
Top

O.G. Urcan wrote: ↑
Tue Nov 26, 2019 11:34 am
To cut to the chase again: at chessgames.com on 18 November 2019 Geoff Chandler falsely attributed to Edward Winter another person's remark about the Morphy opera game, and he is still refusing to post a correction on that website.

One is reminded of the old aphorism about wrestling a pig in mud.
Top

Of course it wasn't Bellini or Rossini it was Beethoven's opera. The clue was in the name and Morphy's ability to look ahead.
Top

OK. Since you feel so strongly about it (and I did make a mistake - not deliberate).

Note I cannot edit a chessgames post, so I'll add a correction. The Red Hot Pawn article has been touched up.

I was thinking. First of all need proof that Fabrizio Zavatarelli is not in fact Edward WInter.

((actually not my idea, I was PM'd it...thanks for all the support here and there but I do enjoy a quiet life and this has gone on long enough.)

Thanks O.G. for keeping any eye on me. I have actually done a 'History of Chess' I was
wondering if you would run your eye over it and see if you can spot any other errors.

Beethoven? did he do music, thought he was the painter who went deaf when he cut off his ear.
Top

Geoff - so you are Sally Simpson! Is that only on Tuesdays and every alternate Friday.

Incidentally, you really should get the Edward Winter book on Capablanca. It's excellent - a message to Santa, perhaps or perhaps your good lady might oblige,
Top

Was once accused of taking Green Pawn (my RHP nik) off chess.com (their logo)
but no. I wrote for the Hibs Fanzine (remember those) in the 70's as Green Pawn.

I have no doubt at all the Winter book on Capablanca will be excellent
but I have Capablanca covered by Reinfeld, Chernev, Hooper and Alexander. 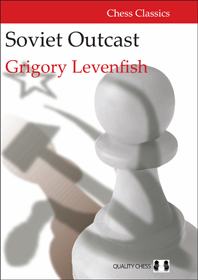 Geoff - Quality Chess do produce some good stuff and this is also an excellent book. I am still deciding on my Christmas book but it will be one of the McFarland books if I can get my wife to use her own account rather than the joint one!
Top

I regret to say that Sally Simpson is maybe my least favourite song on Tommy, sorry about that Geoff

Soviet Outcast is on my Christmas list as well

That's OK tastes differ and the whole of Tommy is good.
(The film was awful, I was actually at the opening. why did they not have the Who singing the songs.)

The song has a Sally girlfriend memories also often played it in 'The Oak when I had a residency there.
Words are great - 'she picked up the book on her father's life and threw it on the fire.'

Been a while. Think I'll play it before to go see the Tiger Cubs tonight.

Have a good 9 year old in that lot. Last league match he drew and after the game a crowd of adults
circled his board to show him his missed win. Everyone got a 9 year look of utter disgust as right away
he demonstrated the refutation to their winning idea. He had seen it and quite rightly rejected it.

When I get it I certainly won't be sending it to you!!!


"This is all the fault of the Chess Historian Edward Winter. ... Ages
ago his site said that when Morphy played his famous game at the opera
in Paris 1858 the opera being performed was Norma by Bellini."

Edward Winter's site has never said anything of the kind.
Top


In the Seventies?
"Do you play chess?"
"Yes, but I prefer a game with a better chance of cheating."

"Ages ago his site hinted that when Morphy played his famous game at the opera in Paris
1858 the opera being performed may have been Norma by Bellini. So I went and bought it."

I'm now enjoying this. We have to do this again. Stayed tuned for the 'Christmas Quiz'.

You side-stepped (or missed) that Alexander did not write a book on Capablanca. I was ready to do a cover of a non-existing book.

A whie back I mentioned' Roddy McKay's Best Games' by Keith Ruxton (did a cover for that.) Keith got plagued for months and months for a copy.