The very latest International round up of English news.
Post Reply
356 posts

You should get in quick with your Wang prediction, Matthew!
Top

On the openings then, after twenty games we have had:

9 x 1 e4 games (5 x Ruys, 2 x Petroff , 1 x French, 1 x Sicilian: today's Sicilian then being the first time that Black has not also moved his e-pawn on move one; white on unbeaten plus one after 16 completed games, MVL v Ding being the one: MVL also involved in four of these nine games)

4 x English openings, apparently abandoned after round two with Black on +2.

Other note: Wang playing his third consecutive game with symmetrical pawn structure in the opening (but OK, he has no seconds, was supposed to be one of the underdogs and yet could easily be on plus two; so we shall let him be)
Top

Alekseenko seems to have been pondering his eighteenth move for three quarters of an hour.
"Do you play chess?"
"Yes, but I prefer a game with a better chance of cheating."

Alekseenko managed to calculate his way through MVL's home analysis and secure a draw ;

Grischuk has had a little pressure against Ding but we should be looking at a draw ;

similarly for Nepo against Wang ;

Caruana has never got to grips with his game against Giri who really should win from here, blowing the tournament, as they say, wide open.
"Do you play chess?"
"Yes, but I prefer a game with a better chance of cheating."

"Alekseenko seems to have been pondering his eighteenth move for three quarters of an hour."

Apparently MVL played this line against Magnus in London, so was KA trying to remember the line, or did he not know that? Fun game anyway.
Top 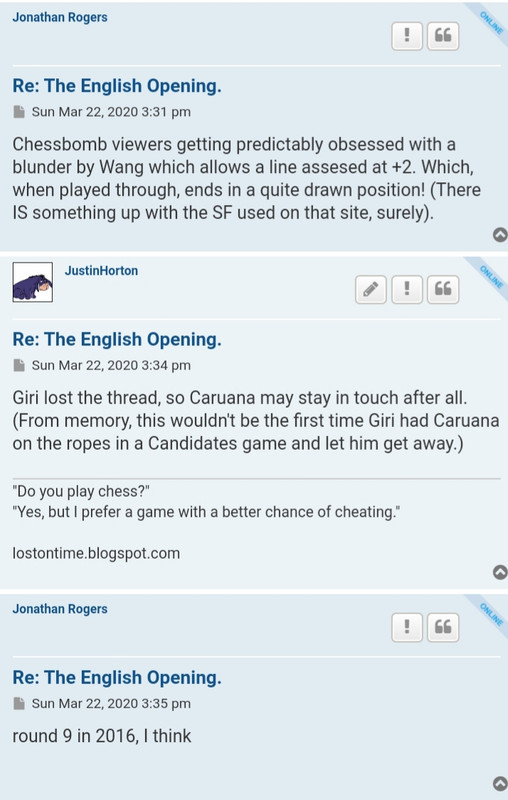 Interesting that Magnus knew at a glance that the Nepo ending was winning. Clearly operating at a different level to the other commentators.
Top

Nepo wins and will lead overnight.
"Do you play chess?"
"Yes, but I prefer a game with a better chance of cheating."

Nepo (Danny's prediction, I think) on +2 then, half ahead of MVL and at least a point ahead of others.
Top

Some authorities consider Wang could have played on.

This guy is good
Top

This guy is good

Some nice predicting! Felt that Giri should have won though.
Top

Grishuk in the post match saying "I don't want to play or be here" but he's doing ok regardless.
Top

This guy is good

Blimey, I'd missed that. Wonder what I could have won on a Lucky 15.
"Do you play chess?"
"Yes, but I prefer a game with a better chance of cheating."