Ravens: Spassky vs. Fischer at the Hampstead Theatre is a play described as: "A Cold War thriller based on a true story".

It seems to have had a decent amount of publicity. Previews from 29 November, and runs to 18 January.

Bit surprised there hasn't been more mention of this in UK chess circles (maybe I missed something).

Does anyone here know more of this (any backstory of those who are involved)?

Wonder what sources Morton-Smith has based his play on? I can't see any chess consultants credited - it sounds like he researched it himself (I just watched the short video on the Hampstead Theatre website, worth watching).

Maybe anyone who goes to see it could post a review here? (I might try and get to one of the showings.)
Top

I'll add links here when reviews appear in the press. For now, a link to the Twitter account of the playwright:

From there, I got to a Financial Times interview (worth a read):

Maybe someone with an FT subscription can see if the full interview has any more details that might be of interest?

I missed that there is an image gallery on the Hampstead Theatre website (where you can see how the chess game scenes are likely to be handled).

Those featured in the play include:

I'll wait for Stewart review before I pop down and see it.

Looks promising. That is the position after 11..Nh5 in game 3. (forget the clocks it's a publicity shot) 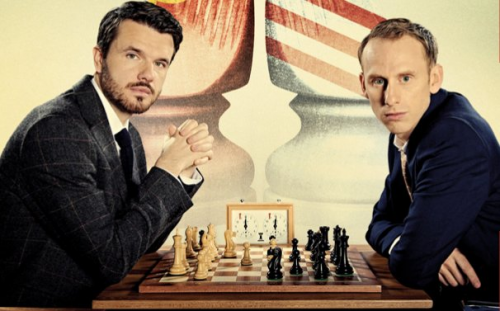 It sounds interesting, but "co-opted" sounds wrong. Parliamentary committees (full of MPs) might co-opt (by invitation) experts in the subject matter so somebody knows what's going on. But Bobby and Boris weren't recruited to fight the cold war by allegory. They were used and of course it was a good marketing ploy as well.
Top

I saw Ravens last night. My rush was that I leave for the Caribbean on 3 December,

I now know what 'Ravens' means, but still don't see the relevance.
It as substantilly accurate, although no chess consultant is listed. In the programme they confused the terms match, tournament and game. Thus, it says there were 20 matches in the tournament. Of course there were 20 games in the match,
It interests me that the perception is that the match was virtually over by the 6th game, when Bobby took the lead. This was even more proounced in the film 'Pawn Sacrifice'. I don't remember feeling like that at the time.
It is very difficult to review objectively a play (or film) where I knew so many of the protagonists. That is not such a big problem with 'Chess, The Musical' as that is intended to be fiction.
Pehaps it gave me some insight into why Bill Lombardy (Fischer's second) was happy in Reykjavik to play me quite a number of blitz games -all of which I lost.
I seldom sppoke to Bobby in 1972 and never afterwards. I am pretty certain he was not anti-Jewish in 1970 when we spent quite a lot of time together, with David Levy.

The play successfully seeks to establish the dynamics of Bobby and Boris with each other and the other people involved. Personally, I don't think you can extrapolate such individual matters to a global overview. Did Bobby really spit at Lothar Schmidt?

The play is over-long, but I imagine would be an enjoyable experience, evn for somebody not bound up wih chess.
Top

As far as I can tell, you don't actually have to have paid to attend the London Chess Classic. You just have to be aware of the discount code, which anyone finding their way to that website can do.
Top

The Hampstead Theatre has extended its London Chess Classic discount for tickets. You can now buy them for the rest of the run until Jan 18th: for the Monday and matinee performances at £19.50, and for Tuesday to Saturday evening performances at £24.50. Enter the discount code LCC2019 in the box at the top of the seating plan when booking online. A small group of us from Streatham and Brixton CC is going to the final matinee 18 January - and will enjoy the discount.
Top

!
"Do you play chess?"
"Yes, but I prefer a game with a better chance of cheating."

I went last night. Thought it well worth going to. Did wonder what it would be like, when in films etc. the chess scenes normally involve the players spending more time staring at their opponents than the board, playing at blitz clip and rarely pressing the clock or writing the moves down. At the end one person thinks they have played a winning move, but an unexpected tactic/resource changes the evaluation from won to lost for them. Last night there were mistakes in the chess- as Stewart has said, the incorrect use of tournament at frequent intervals, clock not being set correctly and in game 2 the arbiter starting black's clock. Also in analysis scenes, white castling queenside one square too far to the left and another position black being a queen down in what otherwise would have been a sensible position (you need binoculars to notice these things!). However all the moves from the actual match seemed correct and I think the analysis of the Nh5 Benoni. They didn't actually have many moves, but made use of innovative techniques to convey the games without moving the pieces. I thought this worked well and anyway going through all the moves would have bored all but the most hardcore chess fans stupid!

The play seemed to stay reasonably true to the events that I have read about the match, including some quite small details. Where it did seem to divulge/get made up was on the Russian side, with their counter-protests and how Spassky acted. Was very impressed with Robert Emms (good chess name- a mix of Bobby Fischer and John Emms!) as Bobby Fischer. He clearly had studied lots of footage of Fischer and was very believable and physically didn't look that different either, especially being mostly dressed in suits. Krogius was played by a woman (Rebecca Scroggs) and she gave a good perfomance but suspect much less serious than Krogius actually was. I played Krogius in a simul once and he looked as serious a Russian as you were ever going to encounter- certainly did not find it in the least amusing when I offered a draw after capturing his last pawn to go down to king v king. Such a small detail anyway- hardly matters at all.

The theatre does have the capacity for some very impressive staging. This was not utilised anywhere near as much as the other play I had seen at Hampstead Theatre. Given the subject matter this was to be expected. Was some good use of the large video screens however with the score being shown and another time where loads of moves (in English descriptive notation) appearing all over the screen. I also liked the conversations that Fischer had with Kissinger (not shown, just his voice). Overall I thought this was a very good play that stayed reasonably true to the events of the match and to the accuracy of how chess is played etc. It certainly gave me the fewest feelings of "chess isn't like that" that I have had in any play/film/musical etc. Impressive that it worked well from both a chess and theatrical perspective (ok I am much less knowledgable about theatre, albeit have been to a few things lately).

Despite being a Friday night, the theatre wasn't very full. I see in this thread that the special offer continues throughout the run of the play. I imagine if you bought the cheapest seats, there would be a good chance they would upgrade you (don't go moaning to me if that is not the case please!). Even if they don't , it is not that big a theatre and you will get a good vew anywhere anyway. You can also get 500 ml bottles of London Pride for £4.50 in the bar, (which you can take into the theatre in a plastic pint glass), which is cheaper than you are likley to find in any equivalent venue/location.
Top

I went to see this earlier in the month. I don't have time to post as long a review/set of thoughts as Andrew Stone above, but I did enjoy it (if you accept a certain degree of poetic license is needed). Some excellent bits, with drama and passion. There was a screenplay on sale, which did have the moves of all the games in it!

I wasn't sure how many people in the audience were chess players. I got the impression not many, though I might have been mistaken.

Anecdotally, how many people who read this forum went to see it? Surely more than have posted so far? (Any reports from the group that went on 18 January?)
Top