... My posts about FIDE in this and in other threads across several different topics are insignificant, probably less than your blog's coverage of king and pawn endings.

Times have chamged, however, as can be seen from another thread -

Individual voices are much louder now and reverberate around the forum with greater impact since the debate is now increasingly being concentrated and focused on "sexism" & "racism" (not just things like the price of admission to the ECF and what cut is taken by FIDE).

Therefore people should adjust their language and expecations to meet the new abnormal situation. Some people are just not doing so...

Those such as JT Melsom and Justin Horton seem to be incapable of doing that and use selective language and minimal quotes to try to score debating points in order to discredit those who do not agree with their campaign agendas.

Then they cry foul whenever anyone responds to them trying to point out some salient facts. Basically they are aways playing the man, before even bothering about the ball, and diving in the expectation their opponent will be penalised, or better yet, get sent off.

Pure adulterated gamesmanship!!
To find a for(u)m that accommodates the mess, that is the task of the artist now. (Samuel Beckett)
Top

I see that in spite of my deciding to have nothing to do with you, you have continued to refer to me in your posts. I'm not going to reply line by line, but my advice to you is look in the mirror, have a period of mature reflection and move on.
Top

Thanks for that sound advice, JT, which means you have at least started to listen to me, again.

You'd probably like me to take my ball with me and move onto another arena.

If certain people don't change their tune, or at least moderate their own language and behaviour, that may become my best option. But I'll kick about here for a while and see how it goes.

By the way, and with apologies, I know it's a bit selective on my part - to date about 33% of your posts have been in "ECF Matters" and a significant number were about "increased membership costs".

That topic was a storm in a local teacup in my estimation but now you've stepped up to "racism" combined with "sexism" at a time when they are front and centre on the world stage.

Quite a leap that - are you sure you ard up to it??

(Justin H, on the other hand, is a seasoned campaigner and hardened polemicist. A man for any occaison - apart from those in the thick of intense math & stats ones - in all seasons.)

Edit - I admit that all amounts to a couple or three "put-downs", which is more than enough for one day.

So, I'll take my ball and go train on my own (at least until I hear what Capt. Justin H, of the opposing team, fires back).
Last edited by John McKenna on Mon Jun 15, 2020 6:00 pm, edited 6 times in total.
To find a for(u)m that accommodates the mess, that is the task of the artist now. (Samuel Beckett)
Top

Just leave me out of your posts John. The blocking system is only effective when a person is logged in, otherwise all posts are visible, which means I stumbled across your comments in at least half a dozen posts in barely seventy two hours. Bit difficult to ignore that scale of comment, especially when it employs many of the same tactics you accuse me and others of deploying. Playing the man not the ball.
Top

You've made your point and I mine.

[Edit - sometimes it is necessary to fight fire with fire.]
To find a for(u)m that accommodates the mess, that is the task of the artist now. (Samuel Beckett)
Top

Pontus Carlsson in Newsweek
Any postings on here represent my personal views and should not be taken as representative of the Manchester Chess Federation www.manchesterchess.co.uk
Top

Thanks to Mick M (& JT Melsom) for posting links, above, to interview(s) with GM P. Carlsson (and IM Watu Kobese).

In his interview, with Newsweek Carlsson makes a reply to Avrukh, as will be seen in the extracts that follow further below.


Pontus Carlsson of the Swedish National Team is speaking out about the *pervasive* racism he has experienced as a black European... "

Carlsson is (we know) a "black European" by adoption, and a dual national who has travelled in Europe on his Colombian passport.

That probably accounts for the kind of greeting he received when crossing borders. (I have been on the receiving end of it when travelling from Britain to Ireland in the early 1990s when I was mistaken for a being a possible terrorist sympathiser. I have also experienced a small, and only mild, amount of what could be called "racism" here and there around the world.)

Columbia, like Ireland, has its problems - very serious ones by Carlsson's own admission - and I wonder if things would have been a bit different if he had travelled on a Swedish passport wearing a "100% Swedish" football shirt.

Anyway, that's enough of me. Back to brass tacks and, at long last, on to mention of Avrukh -


Carlsson has also butted heads, at least rhetorically, with other prominent chess players, such as Grandmaster Boris Avrukh, who challenged Carlsson on Facebook to come up with "one example of systematic racism," without citing "CNN trash." Avrukh also claimed that "Black people have equal rights and even more than equal rights."

I think I know what Avrukh is trying to say there but it is the wrong time and place for him to say it.


Newsweek reached out to Avrukh via email for further comment, but did not hear back by time of this article's publication.

Somehow I doubt Avrukh will say much if anything more, (but even foreign secs. backtrack when kneeded).


While toxic comments manifested in other fields and other forms of pushback have from within the chess community, Carlsson most cautioned against people's reticence and discomfort, which can lead to hollow gestures instead of concrete reforms.


"This is very uncomfortable for white people usually to talk about and therefore most people shy away from it. But if there's going to be any kind of exchange, you have to have the discussion. Not monologues—discussion. Where people meet, engage and talk..."

That last part is easier said than done - certain kinds of "white people" have a tendency to play the "racist" card whenever they see other people try to "engage and talk" in terms that are different to their own.

Who has a proper grip on the truth in complex matters?

Certainly not those who claim they have a monopoly on it.
Last edited by John McKenna on Sat Jun 20, 2020 12:33 am, edited 2 times in total.
To find a for(u)m that accommodates the mess, that is the task of the artist now. (Samuel Beckett)
Top 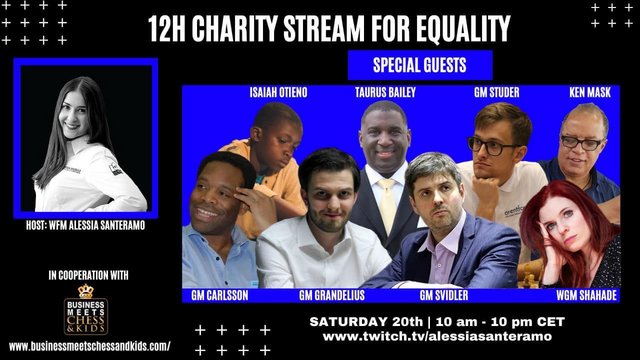 As contorted, mumbling and hand-wringing an apology non-apology for racism as no one might hope to see.
Top

I admit to blowing my own trumpet, but here is a story of a Black (International Master) Life that matters to me: