Rewan Demontay wrote: ↑
Sat Jun 13, 2020 6:00 pm
An en passant capture that leads to triple check is ineed not too hard to set up as you suggested.


I’m intrigued to know which move led to this position.

Saw it as soon as I’d posted!
Top

Jonathan Bryant wrote: ↑
Sat Jun 13, 2020 12:56 pm
I know you can post images directly on the forum but I don’t know how you do it from a tweet. If anybody can show me the way forward I’ll save everybody a mouse click. 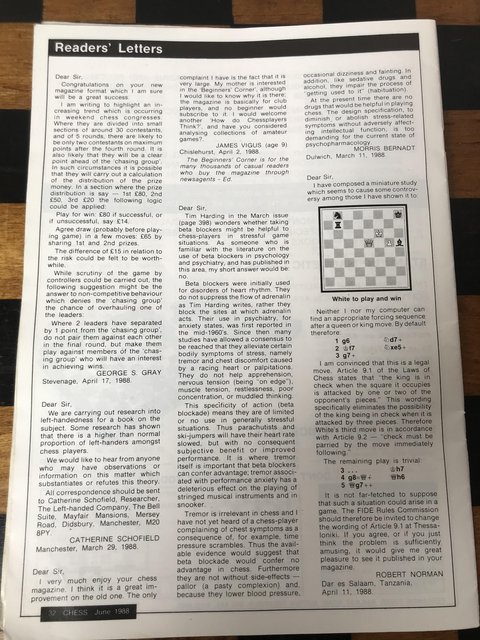 One last thing-Here is a problem in which the king is left in a quintuple check in the final position!

Mate In 4
Dedicated To Marken Foo (a personal friend)

I feel sad that Dr Robert Norman who originated this whole gloriously silly idea did not get to name what became known as the Bosma condition. I've read the biography of his father (linked earlier in this thread), but would appreciate some more biographical details of the son, who died quite young, particularly since I spent some time in Dar Es Salaam myself in the nineties. I don't suppose anyone here knows more about him?

Many of the Bosma condition problems from the 1990s are unsound, and I have found fixes for most. Norman's intended solution doesn't work due to Bosma counterplay by Black (see https://pdb.dieschwalbe.de/P1377131), but White still wins we think, through rather messy play. The Kristiansen #4 is too simplistic. I really want a version of Norman's which shows both the basic idea and the thematic counterplay, and then has a clean finish. Working on it.

There's also a bunch of new problems which have been composed recently. I may put a little article together on the subject, including all the fixes, which would pay due tribute to Dr Norman - if only I could find out more about him?

Welcome to the forum Andrew.
Top

Yes, welcome Andrew! It's good to have you here, my friend.
Do you know, or wish to know, anything unusual about chess? Feel free to contact me!
Top